Starting with a victory!

While we were preparing for the dharna in Sitapur, efforts were underway in Lucknow, mainly through Arundhati Dhuru, to get the order for payment of unemployment benefits issued. And these were successful - on the morning of the 16th, Hindustan Hindi reported that the Commisioner at the Ministry for Rural Affairs had signed the order to release almost Rs. 15 lakh in unemployment benefits and it had been sent to the District Administration. My first reaction to this news was that we could call off the dharna. But during further discussions, it dawned on me that the struggles of workers at the village and block level to get work, get new job cards, be paid for work already done etc. did need resolution. 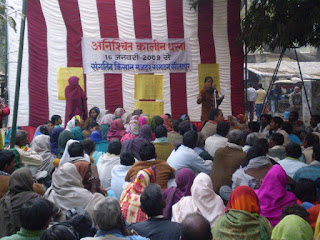 We set off to the dharna site to find the shamiana up and a few villagers already there. Action picked up around 2 pm, with speeches, slogans and songs. Richa talked about the order issued in Lucknow. The Sangathan hadn't received a copy yet. Further, there were 9 more demands that had to be met. Should the dharna be called off? The answer was a resounding no!

At some point, I took a break to have a snack – the villagers had brought food from home, but we hadn't cooked anything. When I came back, it was to find that the P.D. (Program Director) had read out the order on unemployment benefits with the list of recipient villages and the amount to be paid out! Officials at the Collectorate have finally learnt that all such announcements need to be made in public, in front of the Sangathan, rather than privately with one or two representatives...

The victory over unemployment benefits is not a small one – this is the first time such a payment has been announced in Uttar Pradesh and perhaps the only place where a committee with equal representation from the aggrieved parties was set up. To celebrate, a victory rally was planned at noon. But first, the negotiation team went to parlay with the CDO. They came back with disappointing news – the CDO had promised to look into the issue and had not offered any concrete proposals. 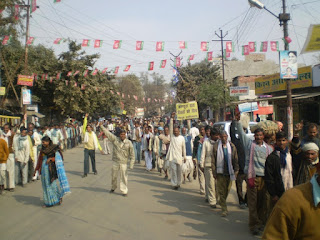 Anyway, the rally set out with all of us standing in 2 lines and streaming out onto the road. The two lines spread out and effectively blocked traffic. We first went to the nearby Gandhi statue to offer our prayers and commemorate the Father of the Nation. We then headed to the market area, chanting slogans and distributing pamphlets about the issue. In the market, the head of the Merchant's Guild, who has been supporting the Sangathan, showered flowers on all the marchers.

I was at the rear of the procession, helping to keep the line in place and prevent any vehicle from entering between the marchers. We didn't have a mike due to a last-minute snafu, so all slogans were chanted with sheer lung power. Different Sangathan saathis took up the lead in chanting slogans and others enthusiastically joined in. The way in which people struggling for their daily existence have taken ownership of the Sangathan is truly heartening.