Getting our message across

The third day of the protest was on Sunday, when the officials would be away. Therefore, plans were made to get some work done, especially recording the account numbers of all the recipients of unemployment benefits. Messages had been sent to the listed villages to send passbooks so that the numbers could be accurately recorded. Further, meetings were held with each of the Sangathan villages to record their individual problems. 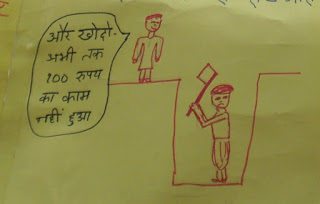 While this was going on, I was busy trying to get 'Sangtin Samachar' going. The previous day, we had written out some news items on chart paper and posted it on some boards facing outward so that passersby could read them. We received the feedback to paste a number of chart papers together and make a consolidated newspaper. I started going around the venue asking people to contribute articles and discovered the challenges with a group of mainly illiterate folk. In many cases, I asked people to get someone to write down their opinions, but that didn't always happen. I also tried to get some people to draw – my idea was to make cartoons. But most people had no concept of cartoons and even that was challenging. I ended up drawing my first cartoon ever! Overall, we managed to get a decent paper together. 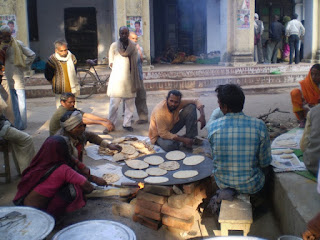 Dwiji was busy presiding over the cooking (surprise, surprise!). A number of women kept asking me throughout the day whether we were married or brother and sister, whether we had children, who cooked at home etc. etc. I also got a lot of ribbing from Bitoli and her enthusiastic group for 'allowing' Dwiji to grow a beard!