End on a high note! 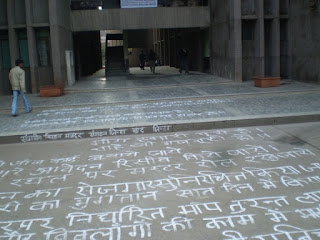 When we returned to Vikas Bhavan on Monday morning, it was to find messages in limestone written at the gate. Some friends sent me off to read the slogans and messages written at the entrance to the Collectorate building. All 9 demands of the Sangathan had been written out in huge bold script. 'Sangtin Kisan Mazdoor Sangathan Zindabad' was written on the vertical portion of the steps, clearly visible to all who walked up them.

My first action, after congratulating those who made this happen, was to find out who had done the writing. I had found the scribe for the next edition of Sangtin Samachar! 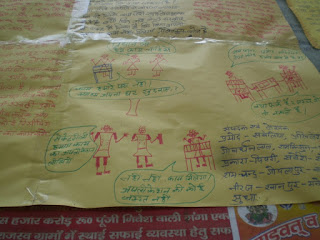 Today, it was a little easier to get some articles, though I still had to work with a few of the writers to improve their work. Some were responsive – others, especially the more educated among the lot were not. But the best part of the day's effort, for me atleast, was finding two teenagers, Akhilesh and Pramod, who were willing to be budding cartoonists. I told them the story we wanted to depict – villagers going to ask their Pradhan and Secretary for work, while the latter were busy preparing forged muster rolls. The two worked together and came with a very good depiction. I had realized the previous day that people here had a unique way of drawing figures. They learnt to adapt that to tell the story, which was great!

Towards evening, everyone was getting impatient with the lack of response from the officials and talk started about gheraoing some officials. We then received the message, via Sharmaji, that the CDO had returned to Vikas Bhavan (he was out all day) and wanted to talk with the Sangathan. There was a brief discussion on whether the negotiation team should go to meet the CDO and the issues that were non-negotiable. The team then set off. The rest of us began a program of songs and slogans. The Sangathan has got this process down pat. As Mukesh bhayya put it, while the CDO is talking to the negotiation team, he should be able to hear our voices and know we are there. It was a good session. We had all eaten and there was a cold wind blowing, so everyone came together inside the canopy rather than spreading out. Some old friends finally made their appearance and entertained us with their songs.

Finally, the negotiation team came out. The CDO had agreed with all of their demands and a notice was being sent out to the BDOs! Camps would be set up to issue new job cards. Work would be started in the Sangathan villages soon and go on till March 31st so that labourers could do as much work as possible this financial year. Where wages hadn't been paid for work done, the payments would be made immediately and responsible officials punished. And so on. These were the commitments the Sangathan was looking for. The struggle was not over – these changes would have to be implemented at the block and village level. But the purpose of coming to Sitapur was fulfilled. Plans began to be made to organize a sammelan in late February to celebrate the victory and galvanize more people in Mishrikh and Pisawa as well as other blocks in the district. 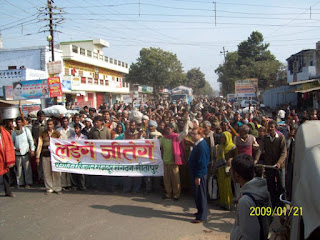 We decided to end the dharna the next day with another small rally – this one towards the place where jeeps and tempos would be available to ferry people back to their homes. This one was less organized than the earlier rally, but no less enthusiastic. The happiness was visible on people's faces and communicated by their voices.

The road ahead for the Sangathan is new and uncharted. This is the first time it has directly brought money into the villages (if one does not count the work obtained through NREGA and payments for the same). And 15 lakhs worth of it! Sadly, many of the less active people and villages are getting a larger payment. This is largely because the more active villages managed to get work. But this is a potential point of conflict. Further, a lot more people will want to join the Sangathan because of the perceived benefits. So the work will expand dramatically. But these are good problems, I think, and with the renewed energy after this victory, the Sangathan should be able to meet these challenges.