On the road to participatory planning

Richa and I returned to Sitapur on May 1st while Dwiji arrived 2 days later. Reena had made plans for us to spend some more time in the villages and so we set off for her house on the 4th. I had been working on a project proposal for the group and wanted to talk to the dairy cooperative to get their inputs on it. There were plans to organize village meetings as well. 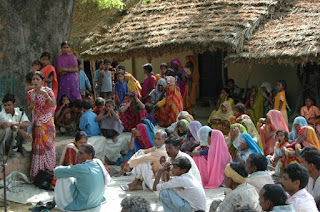 On the 5th, we sent out to Vaikunthapur, a village about 8 km from Reena's house. Shammu joined us and the plan was to go by bicycle. Problem was, there were only two cycles available. Now Reena had no problems sitting on the carrier, but I was sure it was going to be uncomfortable. And sure enough, sitting behind Dwiji meant a joyride with no joy in it whatsoever. So we switched and Dwiji and Reena went on ahead. Shammu and I walked for some time, I sat on the carrier wincing occasionally for some time and I rode the cycle while Shammu ran alongside for some time – poor Shammu!

Vaikunthapur is part of a cluster of villages which includes Gopalapur where there are strong SKMS supporters. The group in Gopalapur even brought along a portable sound system and set it up at the meeting place. Groups from the villages of Ramnagar Tevti and Sibiliya attended and the sound system ensured a bumper turnout, so the atmosphere was much more vibrant than at previous meetings. Reena was conducting the meeting singlehandedly so the sound system really helped.

The proceedings did get interesting at some point as the Pradhan's son was in attendance and strongly objected to some of Reena's statements. A fight would have broken out if calmer heads hadn't prevailed. All in all, an interesting time...

While heading back to Kunwarapur, we stopped by in Sundar, an active SKMS member's house. During the conversation, we found that they had harvested a quintal of oats. During our earlier stay in Reena's house, we had eaten powdered oats with jaggery and mango chutney that was delicious. So we asked for 5 kg. of roasted oats. Initially, Sundar's family refused to take any payment from us. We then got into a discussion of how well-off we were, how it wasn't fair that they would charge their neighbours but not charge us etc. They finally accepted our cash and I think we didn't browbeat them into it!

We returned to Kunwarapur to wash up, cook and eat and plan the next day's activities. I haven't talked about bathing in the villages yet, have I? Not having a toilet is something I can get used to, I think – there are plenty of fields and trees in this part of the country. But bathing is an open-air activity in front of the hand pump. Richa advised me to be bold and ask the menfolk to leave the courtyard when I wanted to bathe, but most women can't do that and pretty much have incomplete baths partially clothed. Incidentally, Dwiji chose to bathe one evening at the handpump near the dairy and soon found himself gawked at by half the neighbourhood!

The next day, Reena called a meeting of the dairy cooperative. The dairy was set up in 2004, got funds to construct a two-room building and even got a road to the dairy sanctioned. However, it has not been smooth sailing where the functioning is concerned. Parag dairy in Sitapur is the main buyer of the milk and the relationship with them has had its ups and downs. A big problem has been the transportation of milk. It takes an hour to get to Sitapur and in the event of extremely hot weather or road delays, the milk is spoiled when it reaches the dairy. The cooperative is planning to buy a pasteurizer/cooler but is not sure how to get financing for it. Parag would give them one but would then want to be the exclusive buyer of milk. Getting funding from non-profits is not easy and none of them have the collateral to take on this kind of a loan. Further, they are thinking of value addition in terms of making khoya (condensed milk), ghee etc. They have also been considering composting, given the increased amounts of manure in the village, and sustainable farming. 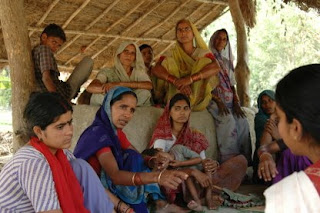 We sat in Reena's cowshed and talked about this and other issues for hours. I was really interested in finding out how the cooperative helped empower these women. Two or three of them in particular did seem to have found their voice in the past few years. One woman talked about how shocked Parag officials were when they flatly refused to take a pasteurizer from them. Another talked about caste divisions within the village. A question about why I didn't wear a mangalsutra led to talk about the treatment of widows. Finally, we talked about the funding proposal I was writing up and the possibility of an exposure trip for these women to groups that are working on sustainable agriculture. This is the first time I have interacted so closely with people on whose behalf I was writing a funding proposal. In fact, I felt that with a few more discussions and planning meetings, I could just serve in the role of facilitator and translator for this proposal. As it should be.