Living with the Loo

At the Pisawa meeting, plans had been made to visit 3 villages in that block. SKMS hasn't been active in Pisawa for long, and while the people there are highly motivated, more mobilization efforts are required. Dwiji and I left for Surbala's house on the 18th itself in preparation. Harvesting activities were on in full swing throughout the region and given that full moon was just a few nights away, a lot of people were cutting wheat at night. Walking in the moonlit fields was an excellent experience. Unfortunately, Dwiji didn't get an opportunity to cut the wheat himself – the villagers were too nervous to let him! 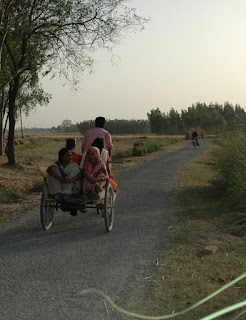 The next morning, we left for Pisawa. Surbala and Reena weren't familiar with the village we were to go to, therefore we headed to Rambeti's house in Allipur. Allipur is close to the town of Pisawa, and 10-20 years earlier, very little was cultivated here due to sandy soil conditions. But apparently, about 10 years ago, Sikh farmers began moving here from Punjab and buying land. They irrigated the land, applied fertilizers etc. and started growing wheat and other crops. Looking at the crop yields they were getting, locals began growing wheat as well. Nowadays, even sugarcane is being cultivated here. But on the whole, Pisawa is less populated than Mishrikh and people are more dependent on daily labour.

On reaching Rambeti's house and after the usual hospitality, we realized that Manikapur, the village we were to go to, was quite far from Pisawa – about 8-10 km. It was more accessible from Maholi which is on the Sitapur-Delhi highway. Surbala and Reena, being unfamiliar with Pisawa geography, hadn't known that and Rambeti, being unfamiliar with the itinerary, hadn't communicated this information to them. Our meeting was about to be canceled due to lack of transportation! Finally, at 12:30 pm Jagannath, Rambeti's husband, managed to find a theliya driver who would take us on the 16-18 km round trip to Manikapur. Om Prakash, another resident of Allipur, lent his bicycle to Dwiji and we were off.

I haven't come across theliyas before coming to Sitapur so don't know how prevalent they are in other parts of the country. At first, I found them extremely uncomfortable and like most other things, they are not designed for people of my height, let alone Dwiji's. But they are beginning to grow on me. Having said that, travelling in an open theliya at 1 pm in 40 C conditions with a blowing loo was draining. I kept myself going thinking about the padyatra SKMS had organized in these parts last year. Not only had they walked from village to village, but they had visited 3 villages every day. After 3 days of this gruelling schedule, some people collapsed from exhaustion – naturally!

We reached Manikapur just before 2 pm and got the active SKMS members to assemble the other villagers together quickly. The proceedings started, as always, with a song. Almost a hundred people had congregated at the meeting venue and it would take a firm hand to keep them engaged. Surbala and Reena proved up to the task. With stories, exhortations and a bit of humour, they kept the crowd entertained and put their points across about the importance of a sangathan and the issues that needed to be addressed in the village. It seems that the women in the village were meeting regularly but the men weren't interested in joining. Extra effort was put to get them involved in SKMS activities. 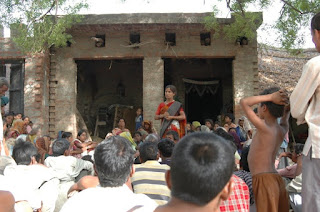 The meeting ended early because the theliya owner wanted to leave. So we left at 4 pm. The ride back was under cooler conditions and I even rode the bicycle for part of the way back. Dwiji and I were staying at Rambeti's house, so we left with her while Reena and Surbala left for Pisawa. Later, we found out that they had an awfully hard time finding transportation and had to call a relative to pick them up on his motorcycle.

Rambeti's village is electrified, which means that they get power for a few hours in the middle of the night! Well, atleast that allows mobiles to be charged in the village itself. There are a lot of gushing accolades being written for the cellphone these days, about how they've revolutionalized the countryside and empowered people as never before. Let's not go overboard, folks! Sure, more information is available than ever before and coordination is easier, but the existing power structures haven't changed. Getting payments for sugarcane and foodgrains is as hard as ever as is transportation. Reading some op-eds recently, one may be fooled into thinking that this little piece of technology has solved all the problems that decades of intervention haven't been able to fix...

That night, we chatted with Rambeti and learnt how she got involved in activism. She told us how she started off as a village-level organizer with Mahila Samakhya and then began talking up more and more issues that affected people in her village. This lady is tough – she has taken on ration shop owners who were hoarding goods, her village Pradhan and even the Block Development Officers. Apparently the BDO of Pisawa (who also has the charge of Mahol block) is so deluged with applications and complaints in Pisawa that he no longer comes to his office there! Rambeti now sits on the investigation committee looking into the unemployment allowance issue. The sheer symbolism of a Dalit woman sitting on a committee with district officials and questioning BDOs and Pradhans is not lost on anyone.

The next morning, we spent some time with the children of the house. Rambeti's younger daughter Khushboo loves playing the dholak and singing, so we coaxed her into a performance. Other girls in the neighbourhood joined in and we were treated to a rousing impromptu concert. Later we talked to the girls about their studies and they weren't as enthusiastic! The boys seemed to be more interested and doing better in school. This was, of course, just a snapshot of the literacy scenario in the area. But among adults, there is a clear difference in literacy levels between the genders. This creates a lot of challenges for SKMS as it tries to establish women and men on an equal footing in all tasks related to the organization.

On the 20th, we were set to go to Taalgaon which is more accessible from Pisawa. Rambeti had to go for a committee meeting, so she left for Sitapur, while Reena, Surbala, Dwiji and I set off for Taalgaon in a theliya. A few kilometres out of Taalgaon, we learnt that a fire had broken out in the village. The conditions were so hot, dry and windy that even a tinder could start a blaze. 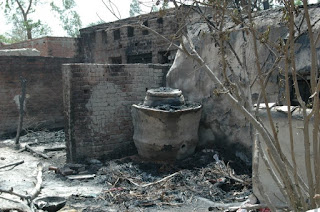 The fire in Taalgaon had been put out, we found, but so much for a meeting that day. We decided to proceed to the village to see what we could do. In the village, we found some SKMS members and went to tour the burnt houses.

The tragedy of a fire is heightened in late April because the newly harvested wheat has just been brought into homes for storage. In the burnt houses, the wheat that hadn't been destroyed by the fire was damaged by the water used to put out the fire. So, in many cases, a family's stock of foodgrain for the entire year was wiped out in just a few minutes. Surbala and Reena asked questions, comforted villagers and later talked to the Pradhan and other officials about getting compensation for the affected families. Then we headed back to Pisawa and from there to Reena's house in Kunwarapur. Given the weather conditions and reports of fires throughout the region, the next day's meeting was cancelled and we decided to head back to Sitapur instead.

Back in Kunwarapur, Reena took hospitality to a whole new level. Though we reached her home at 6 pm, she cooked a full meal and dahi wada as well! The next morning, she let us help her with making khoya (condensed milk) with fresh milk from her cows and buffaloes. We were also treated to sugarcane juice and fruits galore. After all the gastronomical delights, it was time for some food for thought. We talked about the women's dairy in Kaunwarapur and the plans to improve its capacity and revenue etc. I had offered to put together a proposal for soliciting funding for the upcoming year and this discussion would flesh out the dairy component.

The loo raged on through the afternoon and Reena extinguished all fires in her house. Her family had lost everything they possessed in a fire in 2004 and there was no desire to repeat the experience. We left Kunwarapur and returned to Sitapur in the evening tired, a little dehydrated and with a profound respect for life in the heat and wind of a north Indian summer.