From victory to celebration... to reflection

After the achievements of the dharna, plans were made to organize a sammelan, a gathering in Sitapur city. The goals of this sammelan were many: to mobilize other villages in Mishrikh and Pisawa blocks as well as other blocks throughout Sitapur dt., to show the people of Sitapur city, media etc. that the Sangathan did more than organize protests, to discuss the problems of the rural poor etc.

In the meantime, some progress had occured after the dharna vis a vis issual of job cards. Further, work had been started in most of the Sangathan villages. After almost a year of almost no work being provided, ponds were being dug, fields were being leveled and labourers were being employed under NREGA for this work. 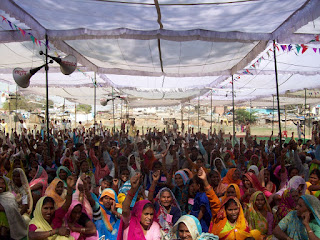 For me, most of February was spent planning for the sammelan, from discussions at the village level on the reasons for holding a sangathan to the nitty-gritty of the venue, equipment etc. The expected turnout was 2000-2500, so this was a bigger event than any I had worked on in the past. My role was small – mainly helping out with posters and a small photoexhibit, helping out in meetings etc. Dwiji had a bigger responsibility – he was in the logistics team.

The sammelan was held on the 24th and 25th of February. Attendees were expected to arrive by noon, but as usual, it was 2:30 pm before the venue began filling up. The sammelan was inaugurated by the lighting of torches held by 5 women and 5 men of the Sangathan. It was followed by slogans, speeches and songs. Activists and supporters who had arrived from MP, Lucknow, Delhi etc. spoke, congratulating the Sangathan and exhorting the audience to continue the struggle. I found the speeches given by the Sangathan Saathis Bitoli and Prakash as inspiring, if not more. Maybe more because I had seen them practicing and had given feedback. To see all their hard work pay off was immensely satisfying.

After the inaugural, we took a break for three hours to relax and have dinner. Incidentally, meals during the sammelan were being cooked using the rice and wheat flour that had been collected during the dharna. At 9 pm, we re-convened to discuss problems with implementation of NREGA, changes necessary to the Act itself and the problems faced by the poor in general. This session continued till midnight after which entertainment commenced in the form of songs. I guess a gathering this size never sleeps! Some singer performed the traditonal 'alhas' while others sangs songs from movements, ghazals and filmi songs. Some performers bagged a good sum of money through requests!

Over in the food tent, events were progressing less smoothly. About 1500 packets of poori-sabzi were to be distributed in the morning (the turnout was less than expected), but by 4 am only 400 had been made! The team hired for cooking may not have ever cooked for this many people and had clearly not anticipated the effort required. Tea was served early, but by the time there were enough packets to distribute, it was almost 11 am. After distribution, a few people started saying that the sabzi was rotten (it did smell a little off, maybe because it was packed tight and because tomoatoes were used). Anyway, that started a commotion and the next hour was not pleasant!

The sammelan was to end in a rally, but first, word was received that the CDO and PD (Program Director) would show up. They did, and spoke as well. The CDO assured the assembled people that overdue payments for work done would be made before Holi and that work would be started in all villages. He said that the government had enough funds to ensure that every family worked for 100 days in a year. There were just a few problems in the system that needed to be fixed, for which he asked the Sangathan to continue working!

Of course, our friends did not let him get away with that! They thanked him for attending the sammelan but also reminded him of the many things that were still wrong. They took on the issue of overdue wages and he assured the assembled crowd of payment before Holi.

Like with other Sangathan events, the sammelan ended with a rally. The resolution that had been approved in the morning was presented to the DM. With a little bit more of slogan chanting, the sammelan was completed.

The sammelan had its highs and lows, but it was clear that this event marked a new phase in the Sangathan's journey. Sitapur had sat up and taken notice of SKMS. And while all the stated goals of the sammelan were not met, such as mobilizing in other blocks, the seeds have been sown. It was a satisfied lot of people brimming with ideas that returned to their villages on 25th February.