Our first visit on Thursday was to a biothermal plant near Potnal. Premdas had never visited it, but had heard that they burn bio-waste to generate electricity. At any rate, we headed there to learn what we could. Like most plants, this was extremely noisy and dirty – a number of workers, their faces completely blackened, were exiting when we entered.

We visited the main control room, got a peek into the furnace and also saw the waste processing facility. Most of the engineers and technicians were Telugu-speaking, from the Hyderabad area. From them, we learnt that the plant generates 7.5 MW (it also receives 0.5 MW to power the magnet in its alternator). It requires 35 tonnes of fuel/hr and 3.5 tonnes of water/hr (the balance of its water needs are met by recycling). The main source of fuel was rice and other grains' husk according to the engineers - though we did hear later that when this bio-waste is not available, they burn wood. The impression we received from them is that they 'manage to get by' – one mentioned that the plant was shut down for a few months for repairs. But others in our group went to another level in the waste processing section heard that they were doubling the plant capacity soon – go figure!

On our return to Potnal, we split up into smaller groups and 'mingled' - the relaxed and familial atmosphere at JMS lured us in. I spent time with the terracota jewellery group – this is one of the income generating efforts launched during the drought years, when there was a need to do more than mobilization. Now 20 women from 2 SHGs work in this endeavour. The women maintain their own records and pay themselves, on average, Rs. 50/day. However, there is a huge backlog on payments because, though they have plenty of inventory, sales are not progressing at a good pace. Their biggest revenue grosser is the 'mela' in Delhi Haat. There are other fairs in Bangalore and other cities where they display their wares. But this is not enough. One possible handicap for the group is that they all speak only Kannada. Therefore they are not able to answer questions in Hindi and English. Premdas and Savitri had been thinking about getting some good posters done which would answer the most commonly asked questions and highlight the social aspects of the products. I offered to photograph the pieces with Dwiji's digital SLR and therefore found myself lugging around a lot of stuff for a weeklong trip. But it did prove worthwhile. 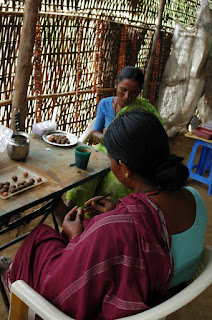 Savitri is one of the CHC fellows and this is her home turf – she grew up in Potnal and started working with the terracota group after completing her Std. X exams. Her elder sisters and even a younger one got married off before they turned 15. That Savitri managed to carve her own path (she has completed her BSW) is a testament to her determination.

After lunch, Premdas managed to herd us together for a discussion with the herbal medicine group – this is yet another income generation scheme with 14 women from different SHGs. When the program was first conceived, 4 women were sent to different places to get trained in health and herbal medicines. Later, more women were trained in Bangalore and local trainings continue on a regular basis. The health workers have combined the knowledge they acquired from their elders with what they learnt in Bangalore and other places and, in some cases, have developed their own cures. They shared some of their recipes with us along with the medicinal value of various plants. The tonics, hair oil etc. are bottled and sold in the melas, but their biggest sales are during their clinics held every Thursday and Sunday. These are market days in Potnal and people pour in from all the surrounding villages. Some of them make their way to the clinic. An amazing achievement of these health workers has been their ability to bridge the caste gap – high caste people will come to get treated by these Dalit women. It also shows how effective they have been and how renowned they have become.

Our next meeting was with the teachers and students of Chilipili. Earlier this school was operated as a day school, moving to a different village each year. But a few years ago, SSA and NCLP provided funding and mandates for residential schools for ex-child labourers. Then, Chilipili found a home in the JMS hut. Just like the school in Prakashpalya, children are taught for 1-2 years in a bridge school setting. Some of the funding Chilipili receives from NCLP was elaborated on. Rs. 11 is provided for food/day/child. This does not allow for much fruits and vegetables, though the JMS cooks do provide some vegetables every day. I found it ironic and sad that none of the employees – teachers, accountant, ayah or cook – is provided a minimum wage. The maximum paid is Rs. 2000 p.m. to the teachers. Navnirman Trust, the trust supporting JMS, does supplement this salary, but how conveniently the government ignores its own laws by cloaking it in terms like 'honorarium' and 'contract work'!

Chilipili refers to the sound birds make and the goals of everyone involved in the school is to make the children as cheerful as birds. And I think they have succeeded. The kids have all also learnt such beautiful songs – many of them original and some that teach them about the country etc. Some of us, especially the crooners in the group, began to feel a little sheepish that most of the songs we knew were timepass Hindi film numbers!

Later, we headed to the market which spilled over throughout the village - the main street, the side streets and an empty space in front of a temple. We managed to get our fix of junk food and also some local mangoes.

The final trip of the day, which in hindsight should have been avoided, was to meet with the women of the neem fertilizer group, the third and last income generating venture of JMS. We sat in the trailor of the JMS tractor and were driven a few kilometres to the village of Muddanagudi. By the time we went around the village once (and were invited into numerous households), it was quite late. The women had spent the entire day collecting and drying neem seeds and were too tired to have a meaningful discussion. We did learn that this venture is reasonably successful and that it is the most local of all the 3 ventures – nearby farmers purchase the fertilizer. It was a tired lot that returned to the JMS hut and turned in for the night.