Week 4 of our orientation was a field trip to Bellary and Raichur districts. We spent the first 2 days in Hospet in Bellary district. Our guide for the first day was Bhagya, a coordinator with SAKHI, an organization working with SC/ST women in Koppal and Bellary districts. In some areas here, the literacy rate of Dalit women is less than 10%! There are also high rates of child labour and child marriage and the Devadasi system still hasn't lost its stronghold here. SAKHI is trying to counter all this with counselling, dialogue, meeting young girls in hostels and working with them to improve the facilities etc. They've had success stories of girls going on for postgraduation and some getting government jobs etc. SAKHI has also been handling rape and abuses cases both legally and socially.

We then began discussing an issue very close to Bhagya's heart – mining. In the past 8-10 years, Bellary dt. has been transformed by the proliferation of mining operations. There are now atleast 138 open-cast mines in the district. It is very hard to campaign against them – in 2003, there were some farmers' protests. But 2 years of drought followed, so though these farmers realized the ill-effects of mining, they often ended up leasing their land for this purpose. For local organizations to work on this issue would be tantamount to suicide – already SAKHI's quarters have been raided because they had filmed some of these operations. Now, after the most recent state elections, the situation is even more intractable. One of the big mine owners in the area was elected as an MP and is now the Health Minister!

The SAKHI members talked about the health effects of mining. Deep shaft mining contains the dust generated to some extent, but open-cast mining is at the surface and does not allow for any protections for nearby areas. Rates of respiratory disease are on the rise, especially TB. Historically, this area was under the Nizam rule and has poorer health facilities than the rest of Karnataka. So the people face a double burden, unable to access good government health services – even the TB hospital in the area was closed recently. And then there is the psychological toll that the sudden influx of cash into a few hands has created in Hospet and other towns... 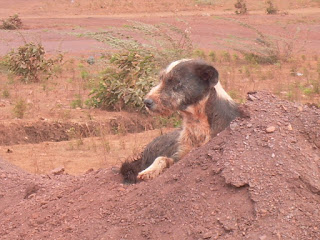 After the discussion with SAKHI, we headed out to visit a mining operation. As we discovered, open-cast mining can be done with very little machinery – in its simplest form, a JCB unearths a heap of soil and then workers sift through these to collect stones that might have iron ore. The stones are later sorted by weight – the heavier ones more likely to contain ore – and sent to a refinery. A little more equipment is required on hills – we saw hills in the process of being razed to the ground bit by bit.

The landscape in these areas is coated by red dust – whatever trees and shrubs still survive are struggling. And in these conditions, men, women and children slog on for indeterminate periods of time because they are paid for the amount of stones they can sift out. We chatted with a few people who were working at one operation – they said they got Rs. 10 for a small bag of stones. They can collect anywhere from 10 to 20 bags a day. They said that these were better wages than they were getting in their villages – a lot of them were from neighouring districts, some in Andhra. But there were also people from Tamilnadu, Maharashtra and beyond. Almost all the groups working in this mine were entire families, with children of all ages at the mine site and those old enough to lend a hand working. While we could clearly see children as young as 8 working, they told us that they were 16 years old...

While meeting these people was insightful for us, I felt very uncomfortable. Here we were - a huge group of well dressed people, clicking away, taking photographs without asking permission or even thinking it was necessary and intruding into others' lives. And while we saw these people as victims of a system that neglected their needs and then forced them to work in such conditions, was it fair of us to objectify them? A number of them had made a rational decision to work there. As they said, there was very little work in their native towns and villages, so by working here for a few months, they would make a good amount of money. Later Sabyasachi, who has lived in Jharkhand, made a strong case about tribals making an economic decision to work in mines even though they may be doing reasonably well in their native villages. Though I didn't fully agree with his analysis – this could be a forced choice – I feel we have to deal with more sensitivity in such situations. Otherwise, we will also be guilty of having engaged in social tourism...

In the afternoon, in a study of contrasts, we went to visit the Tungabhadra dam. Or as it referred to locally, the TB dam. Thanks to earlier politicization and AID discussion, I had been sensitized to the folly of big dams. But many of my co-fellows had developed a change of perspective. Now, the number of displaced villages and the area of land submerged took on a new meaning. Now all the proclamations about the importance of this water for irrigation seemed hollow – more and more of this water is being diverted for mining operations and urban use. We sat at the dam site, discussed what we had seen, sang songs and hopefully put in some good karma at a place of short-sighted plans and massive folly.

The next morning, we visited various interventions of the Punyakoti Trust. This trust was set up by a psychiatrist, Dr. Ravi, and has been working on alcohol and tobacco de-addiction, community psychiatry etc. In their alcohol and tobacco de-addiction programs, they make sure to involve the entire family and try to find jobs for rehabilitated individuals. Their new intervention is very interesting – they have contacted all private GPs in Hospet and now a social worker will be present once a week in most clinics. The job of this social worker is to be present during diagnosis and assess if the patient has a mental illness. A lot of studies are claiming that up to 50% of the general population suffers from some kind of psychological disorder at some point in their life. This effort could be clubbed as one to weed out the psychological from the physical and treat the patient accordingly.

Later, we visited Manochetana, a school for mentally retarded children run by Punyakoti. Here, about 20 children are looked after by staff and volunteers fro half a day while other children are brought in for therapy. The center has been running throgh community support and with a percentage of Dr. Ravi's earnings. The school is very thoughtfully built, with a lot of green and yellow, supposed to be visually soothing and plenty of uneven structures to provide mental and physical stimulation.

Dr. Ravi joined us later to discuss this and other efforts he has been involved in. According to him, in all of Northern Karnataka, with a population of about 1.2 crores, there are just 12-15 psychiatrists (most of them in the Hubli-Dharwad region) and ~30 beds for psychiatric care. This is woefully inadequate. But given that most psychological disorders can be alleviated by counselling and 45% of these disorders can be treated by people receiving paramedical training, there is a lot that can be done in the community. Therefore, people have been trained to identify mental disorders – people with physical disabilities have proven to be particularly adept at this – and ANMs, anganwadi workers, BSW graduates etc. have been trained to provide counselling or referrals. Punyakoti has even worked with women suffering from domestic violence, providing counselling if alcoholism is the problem, referring the family to legal services if mediation is possible and referring them to court if not.

We asked Dr. Ravi about the effects of increased mining on mental health and mental retardation. While the former can be easily linked – migration, a sudden influx of cash and environmental degradation can all lead to stress and mental disorders – the latter is less clear. The mining boom is very recent and it might take some time for it to show up in birth defects. Ravi did mention that a rough survey of Hospet indicated ~330 mentally retarded children in a population of 1.5 lakhs, which is slightly higher than normal.

All in all, an impressive array of work in a field and region that is grossly underserved... 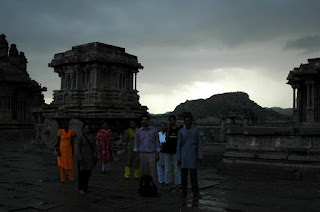 After our time with Punyakoti, we had a few free hours that we decided to spend visiting Hampi, which is just about 15 km from Hospet. The capital of the once-mighty empire of Vijayanagar was a sight to behold. For ruins of this magnificence (it is designated as a UNESCO world heritage site), there were few visitors. Fields of sugarcane and banana dot the landscape as do huge rocks. In a few cases, a little exploration showed us yet another temple hidden from the casual eye. I was left wondering how this empire settled on a capital that was in such a dry region. Yes, there was the Tungabhadra, but these ruins were some distance away from the river. But then discussion revealed that this kingdom traded extensively in gold mined from the Kolar gold fields. Yet another rags-to-riches story based on mining? I'll have to revisit Indian history books!